While many people might look forward to the next jailbreak tool, very few understand the true meaning of jailbreaking. These veteran jailbreakers know the risks and have come to terms with them. If you are new to jailbreaking and are contemplating whether to follow the Pangu iOS 9.3.3 jailbreak tutorial or not. Here are some of the facts you should know before venturing into the jailbreak world.

Jailbreaking isn’t illegal. Even though Apple discourages it and will void your warranty if you jailbreak, no one can sue you for jailbreaking your device. You have to note that jailbreaking is different from unlocking. Unlocking breaches your carrier contract. That could be interpreted otherwise.

The main reason we jailbreak is to bypass the stringent Apple restrictions and push the iDevice to its limits by unlocking the awesome iOS and hardware capabilities. Jailbreaking lets you:

The Pros of Jailbreaking

The greatest advantage of jailbreaking is that you will be in a position to deploy apps and tweaks that would otherwise not have passed the stringent Apple Store screening procedure. This coupled with the fact that your device will give the apps more freedom means that you can push your hardware, for instance, the camera tweaks, further or implement new tricks like 3D force touch to a device that doesn’t support it natively.

Most of the people will jailbreak to get the extra Cydia apps and tweaks. You most probably would fall into this category. You probably wouldn’t care about the other powerful things you can do with a jailbroken device as long as the tweaks are working.

The Disadvantages of Installing a Jailbreak

The dangers of jailbreaking are the side effects of the advantages. The freedom to installed unscreened apps from less strict stores and repositories, for instance, leaves you exposed to malicious code.

With jailbreaking being literally punching a hole in Apple iOS’ otherwise reliable and secure platform, you will be left exposed to malware attacks, privacy issues and probable device instability.

You won’t have the power to do regular system updates since every update is a threat to your jailbreak status.

Staying Safe With the Jailbreak

Jailbreaking is fun. It keeps you on your toes since you not only have to be chasing the next awesome tweak or app in the market but also be on the lookout for the sake of your own security. Here are three golden rules to help keep you safe should you choose to walk down this path.

Check out the infographic below for a visual presentation of these tips and tricks. Do you think I left out something? Let me know in the comments section below. What do you do to stay ahead of the malware and exploits on your jailbroken device? 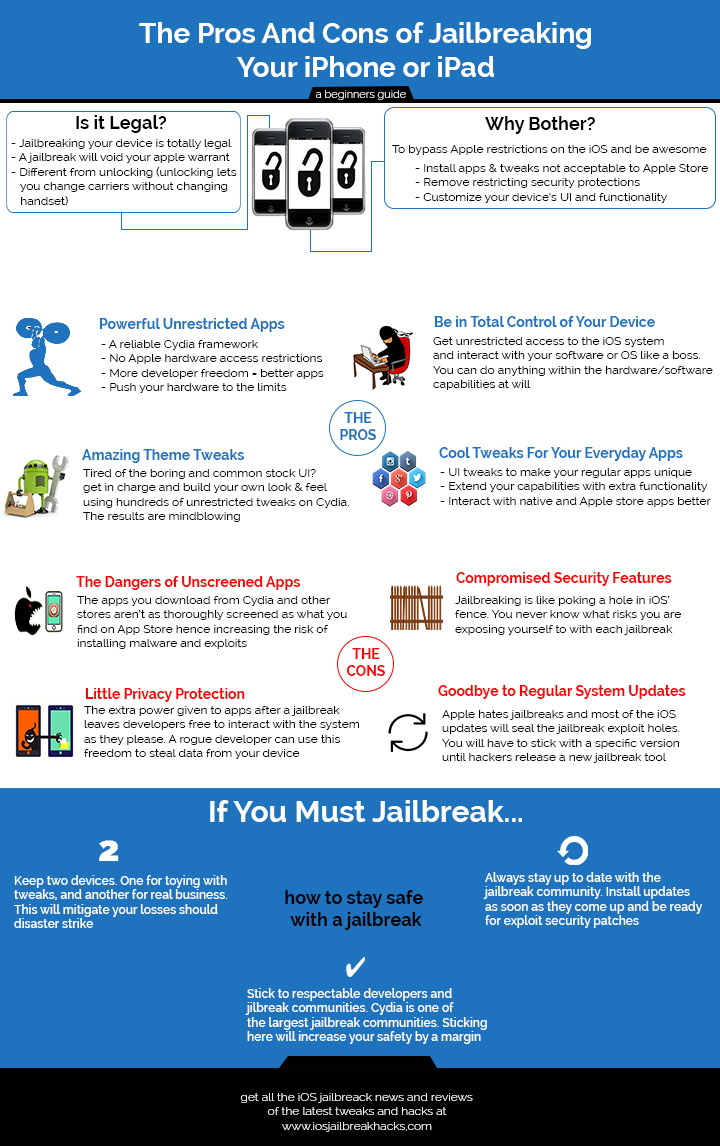 Want to embed his infographic? Copy the code below and paste it on your website