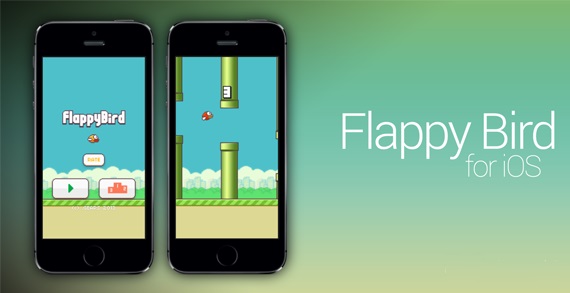 The developer of the Flappy Bird original game pulled it down from the Apple AppStore/iTunes and the Google PlayStore because of some legal issues. As such, you can no longer access the game on those major app platforms. The number of Flappy Bird downloads within its few months of release helped it rank among the best iOS apps. Its popularity has since only been rivaled by the Pokémon Go craze.

Now, if you hadn’t played the game or would love to re-install it on your iOS 9 or 10 device, this post is meant to help you accomplish that in a few simple steps.

Flappy Bird doesn’t have fancy graphics, buts its small size and the 80’s feel were somehow some of the things that propelled it to fame. Not to mention the ease of playing and the need to keep on playing once you begin. Its engaging nature will leave you in a fantasy world, that you won’t dream of leaving.

That being said, below are the ways to install Flappy Bird on your iOS device without the need to jailbreak your iPhone.

Read: How to get free coins in COC

How to Download and Install Flappy Bird on iOS

There are two ways to download Flappy Bird, and both of them don’t need you to jailbreak your device. However, this doesn’t mean that the tweak won’t work on jailbroken devices. In the first method you can download the game using iOSEmus by following the tips below:

In this second method, you will learn to download and install FlappyBird using BuildStore. This store too requires signing up, after which you can get multiple apps free.

Despite being deleted from the AppStore, interested players have always found ways (the two methods above) to play the addictive Flappy Bird game. However, it seems the latest version of iOS -iOS 11- will finally clamp the little bird’s flappy wings!

iOS 11 only supports 64-bit apps while Flappy Bird is a 32-bit game. This means you won’t be able to play the game once you update your iPhone’s software to latest version.

You will get the following pop up if you try opening Flappy Bird on iOS 11: 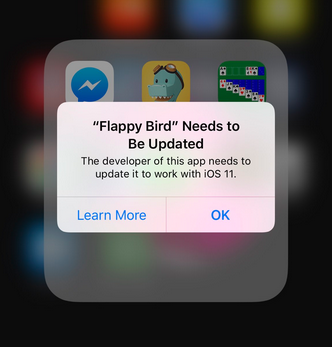 The bad news regarding Flappy Bird on iOS 11 leaves the question of whether there are alternatives to this awesome game.

Here is a list of alternatives that you can try:

Notably, you can play FlapMMO on your browser. The listed games are also free.

Flappy Bird is an exciting and entertaining game that you will have fun playing. Hopefully, you have managed to install it using this tutorial and if not, we’d also like to hear from you. In the case that you want to continue playing the game, then you will have to postpone your iOS 11 update.