Manga has been part of the Japanese culture for decades. What started as a niche hobby in the country has now exploded onto the comic scene, where people are instantly captured by the cutesy drawings and beautiful artwork that defines manga.

If you love reading manga, you are definitely looking for the best manga apps for iOS that provide the latest reads and a seamless browsing experience.

Manga Storm CBR(Comic Book Reader) converts your iPhone\iPad into the ultimate comic book. It provides a quick, efficient and effective way not only to read your favorite manga but organize all your digital comics. The Manga Storm app allows you to easily import manga, supporting all popular formats such as cbr, cbz, rar, and zip formats.

After the importation is where Manga Storm for iOS shines, as it offers powerful organizational tools, allowing you to group your favorite manga into ‘Multilevel Comic Groups’ (folders), or ‘Comic Chapters.’ This feature is especially useful for manga that are released in multiple comic chapters. All in all, Manga Storm will provide you with an incomparable manga reading experience.

Your first impression with Manga Rock is bound to be a good one for one simple reason; that user interface. But besides looking good, Manga Rock lets you choose from a variety of manga sources that include Kiss Manga, MangaHere, Batoto, KissManga among other popular sources, all categorized into various supported languages.

Manga Rock supports and provides Manga in English, Japanese, Portuguese and German. It also lets you filter your search by sources, time and updates, and also offers a paid pro-version that allows you to download extensive manga collections, get rid of in-app advertisements and the handy ability to schedule downloads for new manga chapters.

Zingbox boasts one of the largest manga libraries on this list which is a powerful feature for consideration. It also has a lot of features, including quick download speeds and the aforementioned vast selection of comics.

The only qualm that a majority of users have with the app is the somewhat gaudy UI, but because the app is entirely free, with zero in-app purchases and support of bulk download of manga chapters, it gets a pass from us. 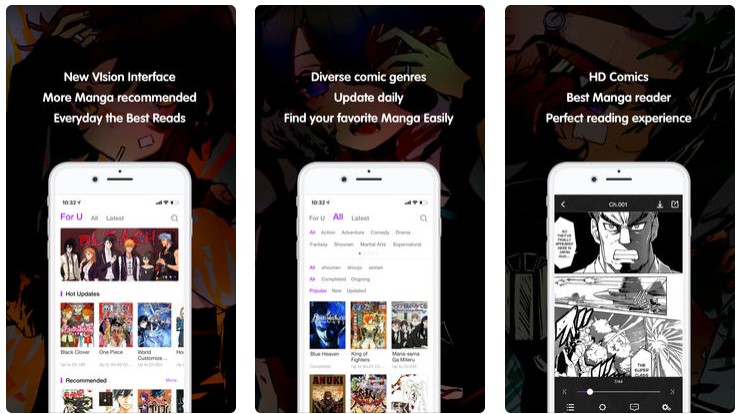 MangaZone consists of an inventory with thousands of popular manga to choose from. It is a quite simple and intuitive UI that lets you can click on the one that interests to start reading. There is also a search option that allows you to find manga that may appeal you by genre, complete series, among others.

You are also given the opportunity to download the manga for offline reading, but I believe it downloads to the app and not on your phone. Overall, MangaZone is a solid manga reader app on iOS and worth looking into. 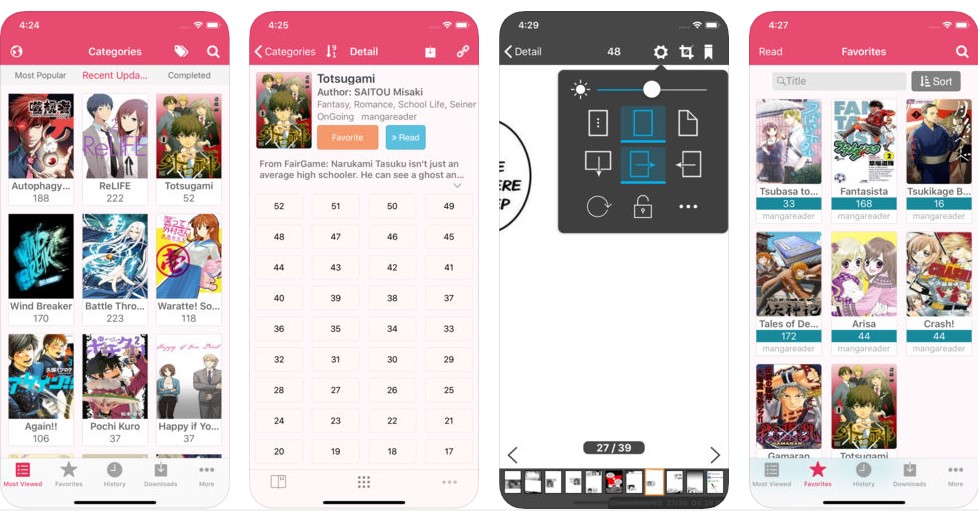 If the name doesn’t immediately give it away, this is a Manga reader for iOS. But it secures its spot on our list by doing so much more than just letting you read manga. Manga Reader is entirely free and collects more than 30 manga sources to allow you to stream from different libraries while also ensuring a massive library of content.

The app also includes intuitive features such as cloud syncing, bookmarking your favorite manga and a lot of reading and search options.

Very much unlike any other app on this list, Viz media is an actual manga publisher. They have an official manga reading app but are probably most popular to manga fans due to their Weekly Shonen Jump magazine where they serialize a lot of popular manga series. They also have a Naruto-specific app if Naruto, and only Naruto, is your thing.

All their apps are free to download, although there is a host of in-app purchases, sometimes to even access content. However, even though the apps need some work and some polish, they are a worthy consideration. 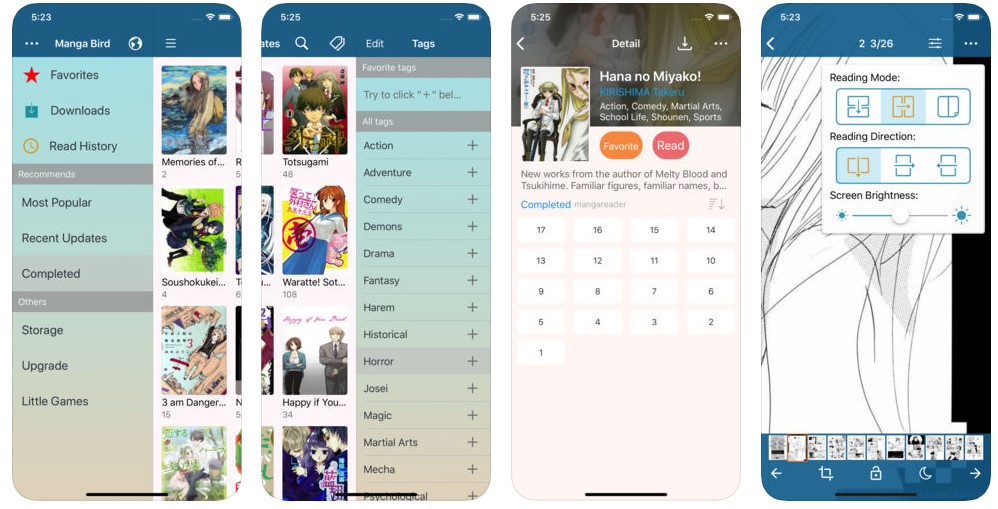 Manga Bird not only allows you to read and download from their extensive library of manga comics and series but also gives you access to over thirty different sources too. This ensures that you get your fix fresh off the presses.

The app also supports servers in Spanish, Italian, Polish, Chinese and Portuguese, with an intuitive interface and some innovative features such as allowing you to set up your favorite comics to receive a notification whenever a new chapter arrives. All these features secure Manga Bird a particular spot on our best iOS manga apps list.

One of the serializations of the VIZ Manga media, the Shonen Jump Manga is so well executed that we felt it deserved a spot on the list. It is credited by many as the world’s most popular manga magazine, probably due to its efficiency in delivering some heavyweights in the Manga world such as Tokyo Ghoul, One Piece, One Punch Man or Dragon Ball Super on the same day as they come out in their Japan homeland.

Now, despite the app featuring some in-app purchases, luckily, most of the huge titles are available for completely free, and that in itself, earns Shonen Jump Manga reader an honorable mention in our ‘best manga apps for iOS’ list. 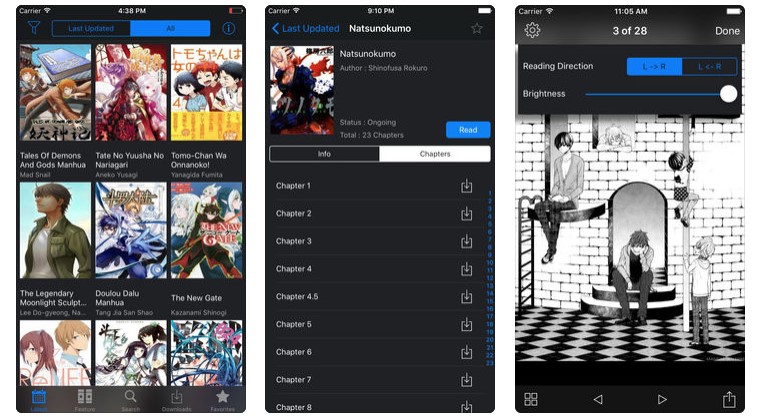 All of the manga on Manga Box are free. Yes, all of them. Manga Box allows you to browse the latest twelve issues as well as the newest issue of a manga series entirely for free. While this is indeed commendable, what cements Manga Box as one of the best alternatives for Manga comic fans on iOS is that it features quality manga from favorite authors that are very regularly updated.

This ensures that not only are you usually up to date with your favorite titles, but other popular titles as well, and all for free — a worthy addition to this list.

Crunchyroll launched this digital shonen manga platform not too long ago, and it was an instant hit. And for good reason too. The service initially started with twelve titles, but that lineup has since been beefed up, with titles launching simultaneously with their Japanese releases.

Doubling up as a Manga reader and a regular CBR, Manga.lib for iOS tries to do it all and makes a very decent effort of it. The app features an impressive inventory of manga that is regularly updated and accessible anywhere in several supported languages.

It also allows you to upload your own titles in popular cbr/cbz/rar/zip and pdf formats and download their titles to read offline. Also, with its friendly yet straightforward interface, Manga.lib deserves a spot on this list.

Comic Zeal for iOS also happens to have been the first comic reader on the app store, so experience has been put to play to make your manga-reading as enjoyable as possible. The app does include some in-app purchases but mostly for themes and other aesthetic purposes, not deliberately crippling the free version.

In 2016, Comixology launched their Comixology Unlimited service that was touted as the “Netflix for Comics,” and with it, Kodansha Comics and a lot of other manga publishers joined the hype.

The result was a well-updated inventory of the latest manga comics and series right there on your palm. So despite this being a paid service, we felt Comixology for iOS deserved a spot on this list.

Webcomics features an impressive library of online manga comics and an equally remarkable collaboration with over 1000 comic creators worldwide to keep that inventory updated. The app also features an intuitive and friendly user interface, with intuitive and innovative features such as an exclusive comic image acceleration technology to save your network traffic and a mini-social media platform for comic fans and creators.

Webcomics for iOS also welcomes up-and-comic manga and comic creators to submit their comics. Therefore, if you’re looking for an extra experience with your manga fun, this app is definitely worth consideration.

The final entry on this list is unique. In that, it is not a manga reader, at all. Instead is a social network for anime and manga lovers and in this age of social media, it is wildly popular. With Anime Amino for iOS, you will find a community of like-minded manga and anime lovers and the recommendations and interactions are pure gold.

With our comprehensive guide of Manga apps for iOS, you are sure to find one that tickles your manga fancy. For more guides and other tips and tricks, check out our other articles on the site.