While it’s anything but easy to build a city from the ground up in real life, it is a fascinating and captivating experience when doing it in some of the best city building games for the iPhone. City building apps these days come with innovative graphics and various features that make for a great simulation game for both kids and adults.

There are a variety of apps for building a city; however, scrolling down to the best ones is confusing. If you are looking for a more epic or a casual puzzler where you can put your techniques and strategies to test, below is a list of some of the best city building games for iPhone users.

Developed by Playrix Games, Townships is your go-to game if you want to test your architectural skills. This game provides an opportunity to build epic cities using modern technology and architectural power.

In Township, you can start small by constructing small towns with paddy fields, grow crops, and rear animals. It isn’t easy as it seems since you have to build your township from a barren area. But what’s even more amazing is its artistic countryside backdrop. Just a few minutes into Township is all you need to understand why it is one of the innovative games in the waves.

Although SimCity has been around since 1989, the latest version features some of the most improved graphics that puts it among the best city building games for iOS. The game allows you to follow the mayor’s pace in building an attractive city where citizens will live happily.

Put your strategic skills into action using the high-quality 3D graphics features. With all these, you can build an amazing city, come up with resources, and provide them to citizens. Still, you can look after the resources and look after citizens as well.

SimCity comes with an interesting 360-degrees rotation feature that gives gamers a comprehensive view of everything inside the city, unlike other similar games. Still, this is necessitated because of the advanced gaming technology the game. With the 360-feature, you can have a real-time building experience using various architectural techniques.

If you fancy competing against fellow players, then why not try out the mayor’s contest?

Fallout Shelter is an interesting city building game for iOS by Bethesda. The storyline behind Fallout Shelter is to help people struggling to survive in an area with dangerous effects of radiation. The gamer’s ultimate goal is to create an arch or several arches to protects residents from these life-threating effects.

Playing this game, you have to build several resource rooms with each having a single purpose. The arch you create needs to have lots of facilities too. The room will, however, get unlocked when more people join you. 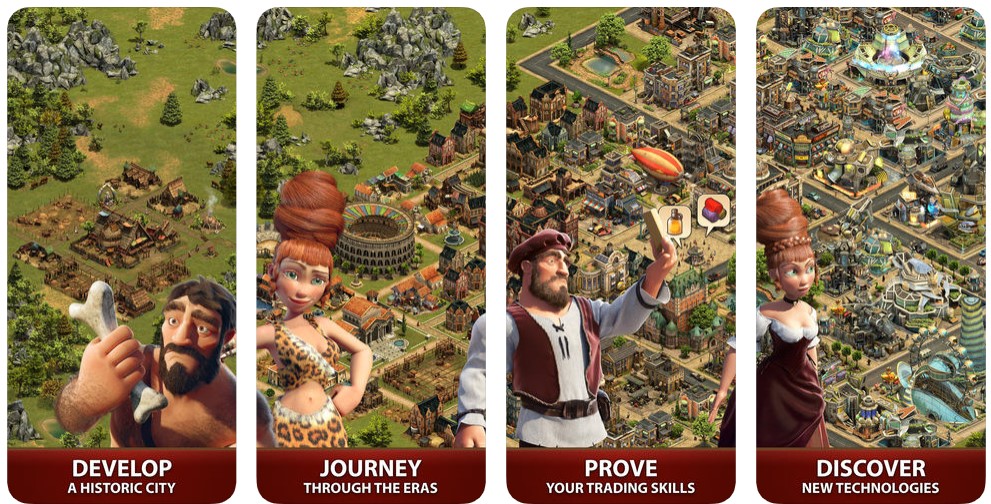 Forge of Empires is an award-winning game from Innogames. The game will take you back to the Stone Age when civilization was still a vocabulary. As a player, you will be part of the evolving era and you are expected to help civilize the region.

The game starts from Stone Age and players are to pass through several levels. At each stage, you have to find a solution to all the problems that come your way. The best part is that there are moments where you will make discoveries just like the ancestors did.

On the other hand, this game is compulsive in that it involves finding out new things on every level. These scenarios are partially to blame for the long hours you will spend gaming.

The Simpson: Tapped Out has been around for more than five years.  This game has been downloaded more than 300,000 times making it one of the most popular city-building games for iOS.

This game is based on The Simpsons; America’s favorite TV Show. The idea behind The Simpson: Tapped Out is for players to rebuild Springfield city from the ground.

The game starts with rebuilding the city after which a player can invite Springfield citizens. You can reorganize the city and control the lives of the citizens. As the game continues, you will come across different twists and moves that add flavor to the entire experience. 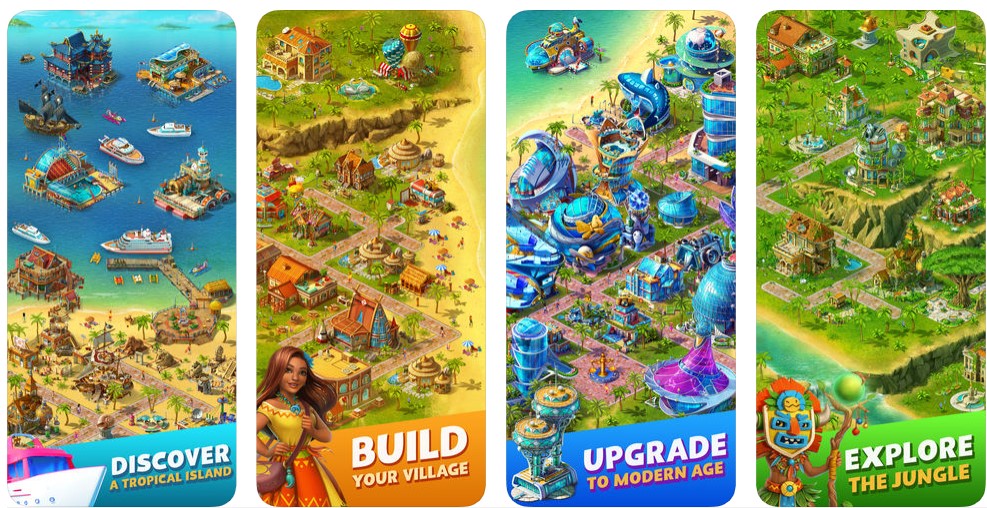 This game comes as a second version of the famous resort building game, Paradise Island I. The gameplay involved constructing island resorts from scratch using different methods. The best part about this game is its fascinating graphics of more than 300 buildings and structures.

You need to unlock new items as you progress to a new level in the game. However, if a certain level becomes too complex, you can opt for in-app purchases where you can unlock things faster, but only if you spend some money. From the thrills and fun, you can get from this game, it is safe to say Paradise Island 2 is among the most engaging city building games for iOS.

The Battle of Polytopia is an excellent and enjoyable futuristic game. Its bright and clear style and the fun storyline is outstanding. As good as it sounds; the game is very challenging since it puts your all your skills to test.

The idea behind this game is a situation where you get stuck in a small world that has equal dimensions and at the same time, you are surrounded by unfamiliar people. The peculiarity of this game is the auto-generated maps that offer forthcoming provocations. You need to start with a certain tribe in a certain city as displayed on the map.

You get a fresh unit to play with each level in the game.  Why don’t you put your survival and management skills to test by trying out this game?

Rebuild is a town building app for iPhone that offers a complete merge of danger, exploration, and rivalry. This combination of different thrills is what distinguishes this game from standard city building games.

If you love horror games then this is a perfect fit for you. The game is centered around zombies and you are required to lead a group of survivors living is a city ruled by zombies. The available blocks are not enough to accommodate all the survivors. For this reason, you need to increase them.

You will need to save survivors, get food and other supplies, explore the city blocks, and try to retrieve back the land. As this is happening, you need to protect yourself and the survivors against zombies. This game is ideal for those who love adventure and won’t give up in the face of zombies.

Townsmen has a primitive setting and as a player, you need to change the village into a thriving empire that is infinite and royal. As you do this, just like the normal building of a city, you will have to deal with natural calamities and other challenges along the way.

Be on the lookout for bandits and thieves, who pose a constant threat while building marketplaces, statues, and monuments.

Idle City Empire is a simple but very interesting game where you build a city with the gold you receive. The gold increases when you advance with building the city.

Just like other city building games, you have to start construction from a neglected area. You’ll begin with essential constructions like factories and supermarkets. The amount of gold you will receive will depend on the perfection of the building. Work a little extra and you’ll have plenty of gold to unlock higher levels in the game.

There are hundreds of city-building apps available for iPhone users in different categories. We have highlighted the best city building games for iOS that we rate highly. Hopefully, the listed games will give you a memorable gaming experience.

Read Also: How to play and win in Akinator